Since Halloween is just around the corner it seems like a good time to get spooky and take a look at some horror anime. Manga author Rumiko Takahashi is more widely known for her sci-fi comedy and fantasy epics such as Urusei Yatsura, Ranma 1/2 and Inu Yasha but she also crafts a really good horror tale as well. Probably not too surprising since she studied under horror master Kazuo Umezu (The Drifting Classroom) whom she worked for as an assistant.

Her most accomplished and longest horror work is the dark fantasy epic Mermaid Saga however she also dabbled with horror in one of her short manga stories published in Shonen Sunday Super magazine in 1983 called The Laughing Target. This story was adapted into an anime OVA in 1987 as one of four OVAs made from the mid 80’s to the early 90’s based on her short story work under the banner Rumik World.

The plot centers around Yuzuru, a handsome young high schooler who is captain of the archery club and his girlfriend Satomi. One night when they both go for coffee after school Yuzuru drops the mother of all bombshells: that when he was only six years old his parents arranged him to be married to his cousin Azusa. Also that since her mother just died she’s coming to stay with his family. Yuzuru protests to the understandably upset Satomi that he never really took it seriously and that it doesn’t change anything about their relationship.

Azusa shows up that evening and while Yuzuru is initally stunned by what a beautiful young woman she’s grown up to be he still only has eyes for Satomi. Unfortunately for Yuzuru, Azusa has taken her vow very seriously and has barely even spoken to any boys her age since they were kids. She can’t quite understand why Yuzuru doesn’t want her despite the fact they haven’t seen each other in years and asks him “is a childhood promise any less sacred?”. 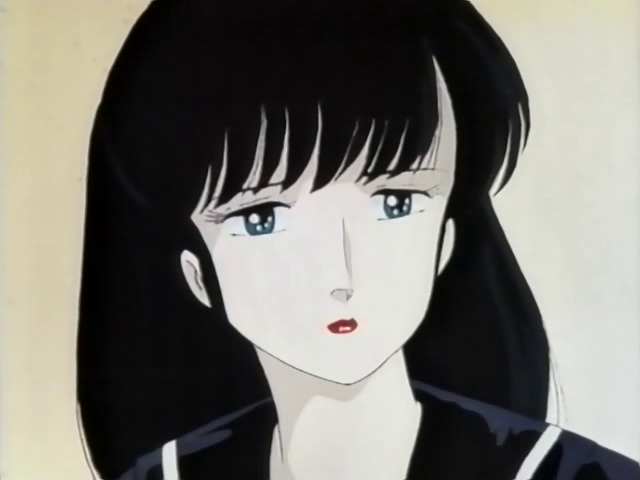 Not only is Azusa’s commitment to Yuzuru despite his obvious lack of interest quite creepy in itself, she looks pretty sinister too. She has pale, white doll-like skin and blood red lips and an intensity in her eyes at times that’s more than a little unsettling.

Soon it becomes apparent that she’s stalking Satomi and that she’ll stop at nothing to get Yuzuru all to herself…..

Before I rewatched this last weekend I hadn’t revisited the anime version in almost twenty years simply because it’s been out of print for a long time (see availability section below). I niavely thought as a teenager that when DVD became the popular format that many titles already available on VHS would be re-released on disc however of course that wasn’t always the case. As I’ve mentioned here before, I sold rather a large collection of anime VHS in the late 90’s because of this belief and many of those titles would have never been seen again if it wasn’t for some kind anime enthusiasts uploading them to the internet.

In spite of the fact it’s been a long time since I saw this particular OVA I think it’s held up remarkably well. It maintains a genuninely unsettling atmosphere from its opening moments right up until the time the credits roll.

From the opening scene of the OVA we know that Azusa isn’t exactly an ordinary girl. We see her in the forest in flashback as a child surrounded by mist-like spirits and see her mother having a vision of her daughter disintegrating before her very eyes and witnessing the appearance of slug -like creatures that are there one minute then gone the next. Suddenely the child is back as if nothing happened.

Further flashbacks elaborate on Azusa’s unique nature and what really happened to her mother. After a fantastically creepy scene set in the girl’s locker room after school the story turns into a tension filled game of cat and mouse. Cornered by Azusa, Satomi is warned to stay away from Yuzuru at which point she lets her mask of humanity slip and Satomi is terrified when she sees what horrors lurk beneath.

The Laughing Target uses its short running time of under fifty minutes well. Nothing feels wasted or unneccessary and despite the story initially seeming quite simple it has a bit of depth and an interesting mythology that’s apparent on a subsequent watch.

The characters are good too. Yuzuru and Satomi’s relationship is understated yet quite sweet and feels as if it’s portrayed in quite a realistic way. Since it’s such a short piece it’s unlike some of Takahashi’s other much longer works where the male protagonist slowly becomes a good guy over time and grows as a character. He’s a decent guy right off the bat (though he does get some points knocked off for trying to show off to the other girls in archery class). He’s chivalrous when it counts though and puts himself at great risk to help Satomi.

I also like the way that Yuzuru and Satomi’s archery scenes aren’t just used to pad out the school scenes running time, they become important to the plot in the finale where Yuzuru must use the only weapon he has to protect the girl he loves.

The animation by Studio Pierrot is nice too and the music is well suited to the dark atmosphere it creates.

All in all I’d recommend The Laughing Target if you fancy a short anime movie to watch this Halloween. In this reviewer’s humble opinion it does everything well. It’s not easy to find but it is available online if you don’t mind watching something in VHS quality. It’s a great little OVA that I’m glad I revisited and really does Rumiko Takahashi’s manga story justice in animated form. Now if only someone would rescue it from home video limbo (Discotek? Sentai Filmworks? are you listening?).

Availability: Sadly no official release is still available. The last time this was seen in English in the US and UK was in the mid 90’s. The US got a subbed and dubbed VHS and a subbed laserdisc whereas the UK got a dub only on VHS. The manga versions of all of the Rumik World stories are unfortunately currently unavailable too. Hopefully that last one might change in the future as VIZ have been slowly ressurecting her back catalogue in print recently with titles that haven’t been available in decades re-emerging. Extremely welcome as she’s one of my all time favourite manga authors.