I visited the cinema twice in January and saw an anime movie both times. Because this is a hugely rare occurrence here in the UK I felt the need to write about it….. 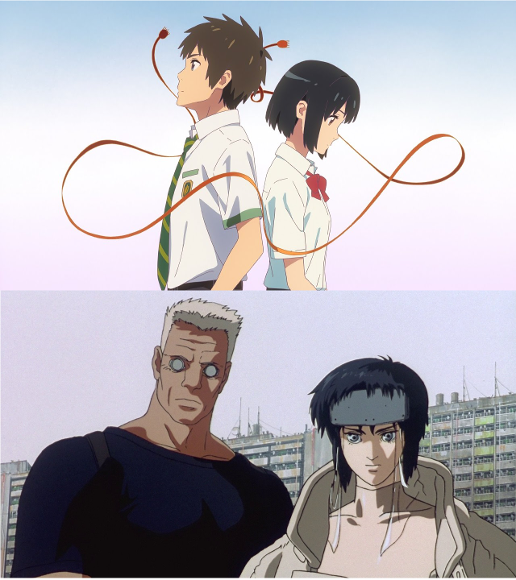 First let’s rewind to 1996 and the first theatrical release of Ghost In The Shell here in England. Back then the only anime distributor I knew of releasing stuff at the cinema was Manga Entertainment UK. Screenings were rare and they were all down south in places like London and my extremely broke 16 year old self could not afford train fare to go and see any of them. At this point I had only been interested in anime and Japanese cinema for around three years and it was still quite new to me. Many of the titles I wanted to see such as Ghost In The Shell had been preceded by equally excellent landmark anime movies including Akira, Patlabor , Patlabor 2 and Wings of Honneamise. I’d missed every single damn one of them. Not one screening I remember at the time was anywhere near my home. It frustrated me beyond belief. It was the rise of Ghibli in 1997 and 2001 with Princess Mononoke and Spirited Away that got anime into UK cinemas a little more frequently.
Each subsequent Ghibli film had a limited release in the likes of arthouse cinemas like the Tyneside cinema here in Newcastle. However Ghibli was almost all you were guaranteed to get unless you went to a dedicated anime convention screening a new film. I was grateful to get to watch Ghibli on the big screen back then, but after a while I did hunger for a wider range of titles at the flicks.

Besides a one off showing of Akira at the Tyneside cinema a few years back (which felt a lot like seeing it for the first time I must say, what a glorious sight to behold) we never really got much else at the flicks except Ghibli, the one constant UK anime cinema presence since the late 90’s. Occasionally we’ve gotten something from an already quite popular long running franchise like the recent Dragon Ball  movies but rarely will distributors take a risk on brand new stand alone films.
2017 looks like it might be the year to change all that however. 6 non-Ghibli anime movies I know about are getting cinema releases and I got to see two of them right at the beginning of the year. Have I entered a strange parallel universe or something?

Last year Manga Entertainment UK started a 25th anniversary celebration with nationwide screenings of Akira and then announced Ghost In The Shell would also be re-released this year. Since I’d already watched Akira at the Tyneside I decided I’d go see Ghost upon release in January. I was kinda busy in October and November and as a result I missed entries on Anime Limited’s blog stating they would be showing Makoto Shinkai’s Your Name in selected cinemas. Though the screenings started in December my much loved hallowed ground of cult and foreign cinema the Tyneside were still showing it in January. Thus January became a wonderful month in which I got to see the classic Ghost In The Shell and to see Your Name for the first time as well.

Ghost In The Shell, like all of Mamorou Oshii’s films has held up very well indeed. I’ve revisited the film many times since I originally bought it on VHS and I own both the DVD and Blu Ray however I couldn’t pass up the opportunity to see it on the big screen. Whilst Oshii’s direction is definitely a large part of what makes the film so memorable its important to remember that the look of Ghost largely comes from Masamune Shirow’s original manga and the “world building” created within its pages. As mentioned in the “welcome” page of my site I always got annoyed with UK video companies in the 1990s for releasing anime movies that were part of larger franchises that seemed somewhat out of context for non-fans. However this film is a perfectly accessible starting point given that it outlines all of the important stuff within its plot. If you’ve been into anime for quite some time then no doubt you’ve already seen this landmark film however if you’re new to it then it really is a must see and will no doubt appeal to non-otaku who love Cyberpunk films and novels. Shirow’s characters and universe mixed with Oshii’s keen eye and an intriguing story make for an entertaining film that not only muses on the nature of the human soul in an increasingly technological world (definitely ahead of its time) but also has spectacular action scenes too. While you’re at it check out Shirow’s original 3 manga volumes (re-released this month) plus the second film Innocence (more of a stand-alone film than a sequel) and the TV Series Stand Alone Complex and Arise too (I still need to get round to that one but it looks good).

Makoto Shinkai is a name that will be known to most people interested in the medium these days. His films are often heartfelt, funny, dramatic and touching. From his debut short films such as Other Worlds, She and her Cat and Voices of a Distant Star to his last feature The Garden of Words he has made a name for himself as a very bankable writer/director. He’s a modest man too who disagrees strongly with his many comparisons to Studio Ghibli legend Hayao Miyazaki. Their films really are remarkably different but both directors have captured the imagination of fans in both Japan and the west and have become somewhat more mainstream so I can understand the comparison.

Your Name is an exceptional film. Trust me when I say I’m not someone who uses that word lightly. While I’ve been watching anime and reading manga for more than half my life and I am somewhat obsessed by it, if anything that has made me more critical of the medium.

You know that feeling you get when you see a really good film and the story and characters stay with you all day and you can’t stop thinking about it? That’s exactly what happened to me upon leaving the cinema after seeing Your Name. My girlfriend Lynsey was exactly the same. We discussed it upon leaving the cinema, then we talked about it for the majority of a 45 minute car journey and then discussed it some more later as well.

It starts out as a good natured playful and funny slice of life comedy with a slight fantasy twist. A boy from Tokyo called Taki and a country girl called Mitsuha wake up in each other’s bodies and have a traumatic day of not knowing what the hell the other person’s lives entail, who anyone is or what’s expected of them. The next day everything is back to normal except their friends, family and colleagues all comment on just how weird they were acting the day before. Soon they realise that it’s happening on a regular basis and have no idea how to stop it. Because it causes chaos in each other’s lives they decide to create some ground rules and communicate with each other in imaginative ways to minimise the damage the other could potentially cause. Of course this leads to some great comedy situations with everything from Taki sewing up the skirt of a female work colleague he’s attracted to, to Mitsuha leaving Taki broke all the time by spending all of his money on fancy cafe food that she doesn’t have access to out in the countryside.

If the film kept up this pleasant and charming comedy pace it’d be a fun and engaging piece of escapism. However around half way through the film dramatically changes pace and blends a string of genres together that work in tandem to create one of the most exciting, edge of your seat and emotionally affecting films I’ve ever seen. I could go into so much more depth about what that entails but honestly you’re better off experiencing the film exactly as I did with no clue as to what was about to transpire. Your Name is very much a film about the bonds we share (A concept called “Musubi” from Shinto Buddhism about everything being connected is an important aspect of the movie) and the lengths we would go to in order to protect them. I wouldn’t call myself particularly jaded or cynical and I’m a fairly emotional kind of guy but Your Name affected me in a way few movies ever have. It also has a level of detail in it that reminds me of a lot of classic theatrical anime of the 1980’s and some stunning locations based on real world equivalents that have prompted pilgrimages from fans across Japan. In short just see it and if you disagree I guess I’ll see you in the comments.

Your Name is still showing in UK cinemas and begins its US theatrical run this month. It will be released in the fourth quarter of 2017 on Blu ray and DVD by Anime Limited. Ghost In The Shell UK and US theatrical runs sadly were one night only and at the time of writing have now ended.